“A symbolic victory” / The SP sued for using his son’s photo in the campaign, Besjan Pesha wins the lawsuit against the Socialists

The court of Tirana on Tuesday condemned the Socialist Party of Albania for using the image of a minor without the authorization of his parents to use it as a decoration of the opening of the electoral campaign of the local elections of 2019 in the rally held in the square “Mother Teresa” “, in Tirana.

The news was confirmed by activist Besjan Pesha on the social network Facebook, who shows that in 2019, the Socialist Party used an image of his son, taken without permission from his personal Facebook page, to use as a decoration in the opening of the election campaign for local elections.

In his short story, Pesha states that after noticing his son’s image, he decided to take the case to court immediately, while today the latter decided that the Socialist Party should compensate the boy and them as his parents, forcing him the political entity in question to apologize and remove unauthorized images from social networks.

He considers this decision a symbolic victory, further emphasizing that the credit goes to the lawyer Dorian Matlija for the professionalism shown and of course the judge of the case for giving the decision.

“I wish I had set a precedent, which can be used by politics and citizens, leaving children aside in the game with clay balls of our political mejhana“, Writes Pesha. 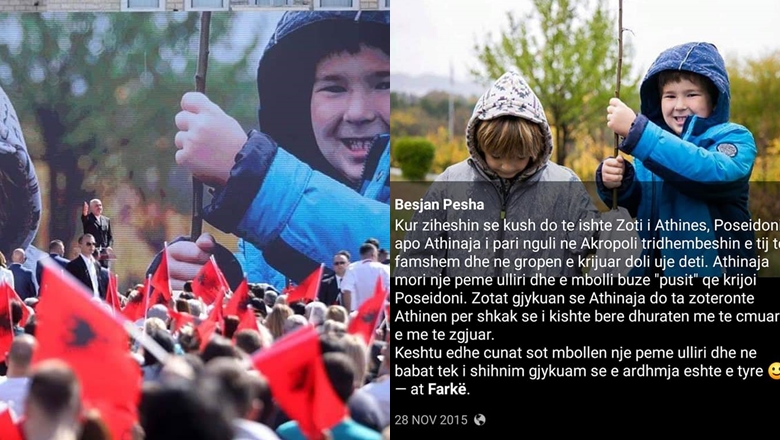 A day after announcing that he would pursue the legal path of using the image of his minor son in the SP campaign for the local elections, the activist Pesha addressed a letter to the Agency for the Protection of Children.

In the letter sent, Pesha stated that he felt revolted and insulted that the photo of his son, without any authorization from the parents, ended up on the giant screens in “Mother Teresa” square, as well as consequently in all Albanian audiovisual media, the social network Facebook, as part of the album published by Prime Minister Edi Rama, or various portals which have reflected this activity of the Socialist Party.

In 2019, the Socialist Party held a rally within the Union We Want and during Rama’s speech, various photos appeared on the screens behind him. One of the photos that appeared was Besjan Pesha’s son, Daris Pesha.

Presidency as Azovstali / Meta: Until July 24…

Presidency as Azovstali / Meta: Until July 24…

Tirana / They distributed drugs in small doses, two young people were arrested, three others were prosecuted

US / Police accidentally kill a 14-year-old

The national team is preparing for the next two matches, here are the changes from the last gathering